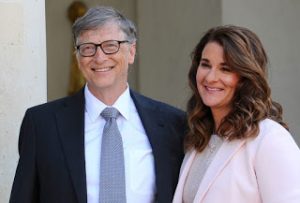 “That would be black people next, quite honestly, and many other people of color”

Melinda Gates who is the wife of Microsoft founder Bill Gates has broken her silence about who she thinks should be the first in line to receive COVID-19 vaccine.

Speaking to TIME ahead of the 2020 Global Vaccines Summit which took place in the UK on the 4th of June, Gates said that black people must be vaccinated after health care workers.
“The first people that need this vaccine are the 60 million health care workers around the world. They deserve to get it before anybody else. Then you start tiering,” Melinda said.
Melinda went on to say that black people in the U.S must be vaccinated after more than 60 million health care workers around the world.
Melinda also expressed her views about the brutal killing of George Floyd by racist cops. “We all need to really pause during this time and learn as best we can from it. Even before we saw this senseless death, COVID had already started to show us gaps and structural problems in our country.”
“We are seeing black men die at a disproportionate rate. We know the way out of COVID-19 will be a vaccine, and it needs to go out equitably,” she added.
“In the U.S., that would be black people next, quite honestly, and many other people of color. They are having disproportionate effects from COVID-19. From there, people with underlying health conditions, and then people who are older. Those are the ones who all need it first. We also need to think about essential workers who are keeping our grocery stores open for us so we can buy food, or who are making sure that food moves through the warehouses,” she added.
During the Global Vaccine Summit, the Gates Foundation committed $1.6 billion to the Global Alliance for Vaccines and Immunisation (GAVI).
Bill Gates came under fire after a number of old videos surfaced where he expressed his personal views about overpopulation. It is these videos that were circulated on all social media platforms that attracted criticism of Gates.
Gates has since denied allegations that his vaccines are aimed at depopulating the world. He was also accused of wanting to use vaccines to implant microchips to beneficiaries of COVID-19 cure.
In May a member of Italian Parliament, Sara Cunial a delivered an emotional speech calling for the arrest of Bill Gates for what she alleged as crimes against humanity. A video recording of her speech was viewed by millions of people after it was shared on all social media platforms.
0
SHARES
ShareTweet
Related Topics: