Hero to the rescue in Florida Road flat blaze

Quick thinking saved the day as a fire tore through the upper two floors of a block of flats in Florida Road yesterday.

While firefighters raced to the scene at upmarket Mitchell Heights, local resident Siyabonga Mathenjwa, who was in his flat on the second floor when the fire started at about 9.30am, raced to the rescue.

The fire started in the fifth floor flat of a businessman, who was having breakfast in the flat with his wife when the fire started. It is believed the fire may have been started by an electrical fault.

It quickly spread to the flat upstairs, belonging to a pensioner in her seventies. 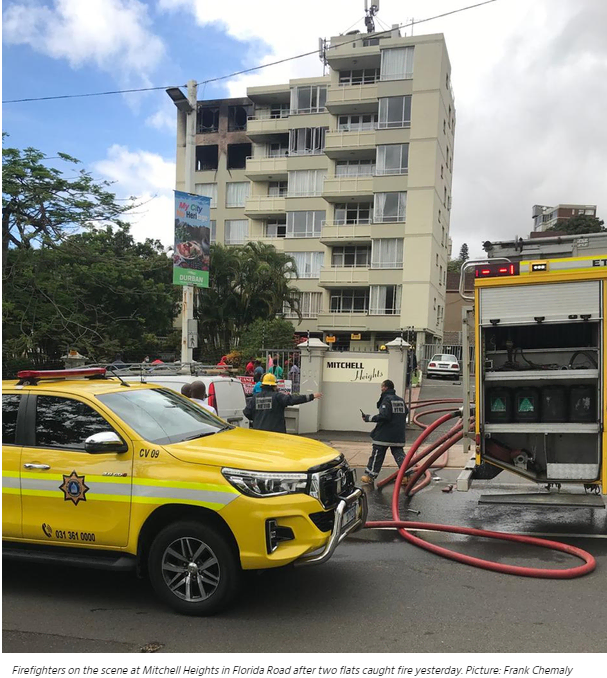 Mathenjwa described how he heard a neighbour shouting that there was a fire in the building, and raced downstairs to get a fire extinguisher and up to the burning flat.

Realising that the raging fire was now beyond a fire extinguisher, he raced through the burning kitchen and down the back stairs to get the block’s fire hose, training it on the fire until the fire brigade arrived and the raging flames were put out.

He said four or five other people, some from the building, but others good Samaritans who were passing on Florida Road, came to assist.

He also helped the pensioner get out of her burning flat and safely to the ground.

The pensioner, who didn’t want to be named, said she had lost everything. The fire from the flat below reached such ferocity that it forced its way through her open windows. “I tried to put out the fire but I couldn’t,” she said. “ People were yelling at me to get out.”

Neil Gibb, chairperson of the block, was not in the block at the time but heard of it almost instantly on social media and sent an urgent WhatsApp voice note to all residents to get out the block, before racing to Florida Road.

Another resident told how he heard on social media that his flat was on fire and raced home. He lives on the fifth floor and had not yet been given the go-ahead to enter the building but hoped everything was still intact.

A local businesswoman in the area said the first she knew of the fire was when she heard a massive crack that sounded like a gunshot. It was the aluminium window frame being forced out by the heat of the fire.

Paramedics at the scene said two people had been treated for smoke inhalation, and there were no major injuries.

The Independent on Saturday