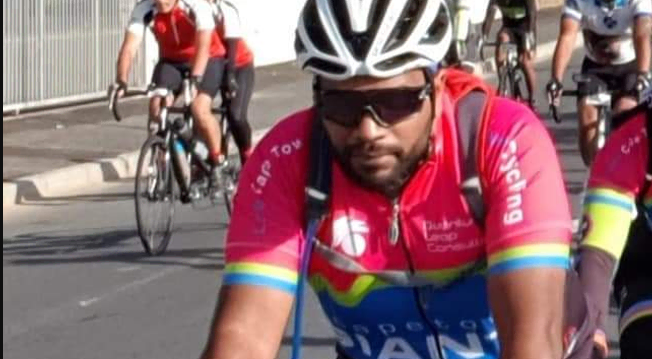 Cape Town – While a 28-year-old suspect who allegedly knocked down cyclist Nathier Roberts, 38, during a bike ride appeared in court, family and friends mourned his death at his Janaza (funeral) in Goodwood yesterday.

Roberts died after he was knocked down by an allegedly drunk driver during a bike ride on the R27 West Coast road near Atlantis on Sunday, with his cycling community describing him as a good man who loved cycling.

Ntabazalila said Faro is being charged with two counts of attempted murders for now and driving under the influence of alcohol.

“His case has been postponed to 29 January 2021 for further investigation.“

Roberts, who was a member of the Cape Town Giants (CTG) cycling club, died at the scene when the vehicle allegedly drove with excessive speed from Atlantis towards a T-junction, colliding with him and another cyclist. The other cyclist was transported to hospital.

Western Province Cycling chairperson and the vice-chairperson of Cape Town Giants, Sharief Peters, said they were saddened by the loss of a true giant, saying no words could express their feelings.

Peters said Roberts’s Janaza was held at his home in Goodwood, and he was buried in Mowbray cemetery.

“What started out as their normal send-off club ride to their Double Century teams ended in tragedy.”

He said Roberts would be remembered for his kindness and caring. On Sunday, before he was hit by the vehicle, he offered to be a gatekeeper with the intention of leaving no man behind.

“That says a lot about his character. Roberts never missed a West Coast ride. His first ride with CTG was on that road. However, Sunday was the road of no return,” he said.

Safety and security Mayco member JP Smith said that in the past week the City’s enforcement agencies made 180 arrests, of which 73 were for drunk driving – more than double the number for the previous week.

Smith said the increase in drunk-driving arrests did not bode well for the festive season. Each year, there was a renewed focus to make roads safer, and yet there had been a steady increase in the number of drivers arrested for being inebriated.

He said: “Some of our most tragic road accidents annually are a result of drunk driving as many people are feeling festive and are over-indulging.”

Smith said it was one of the biggest threats to road safety, and that their officers would continue to clamp down on lawless drivers.