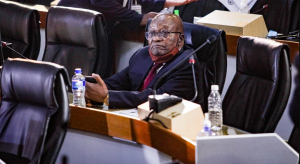 Sikhakhane was arguing as to why the commission’s chairperson, Deputy Chief Justice Raymond Zondo, should be recused.

The commission’s evidence leader, advocate Paul Pretorius, said it is difficult not to conclude that the real reason why Zuma brought such an application is that he has an apprehension there will be findings against him.

Zuma’s application was heard on Monday.

Sikhakhane argued that the commission has fed into a narrative that Zuma “messed up our country” – and that Zondo’s comments, particularly to “sweetheart witnesses” with an axe to grind against Zuma, aided in that narrative.

“There is something wrong with how this thing was established. It was not thought through. It was politically motivated in the thinking,” Sikhakhane said.

Then-president Jacob Zuma established the commission in January 2018, on the eve of an ANC NEC meeting expected to discuss his recall. He had exhausted legal options to set aside former public protector Thuli Madonsela’s recommendation for the establishment of such a commission, with its chairperson to be appointed by the chief justice.

Pretorius said it appears that Sikhakhane includes political conspiracies in his reasons why he wants Zondo recused.

He said there was no indication of actual bias placed on record.

In short, Mr Zuma must be heard, and his version must be considered.

He said he doesn’t understand how this constitutes bias.

Pretorius said Zondo is obliged to do everything in his power to ensure Zuma appears before the commission.

He added that Zondo is also obliged to engage witnesses because his role is investigative and he must get all versions before the commission.

“There is no doubt the former president is central to the work of the commission,” Pretorius said.

He said this is why they need to hear his testimony.

He said, so far, Zuma hasn’t provided his full cooperation, and one can only hope he will do so from now on.

He said Zondo’s recusal would collapse the commission.

‘In the mind of my client’

“I know no less law than advocate Pretorius,” he said.

He disputed that he was “peddling conspiracies”.

“I’ve put to you what is in the mind of my client,” he said, adding that he found it offensive.

He also said it was an insult and unfair to say that Zuma has an apprehension of findings.

“He fears no finding.”

Zondo adjourned proceedings until 10:00 on Tuesday.

He said he will consider the submissions overnight and provide a decision as soon as possible.